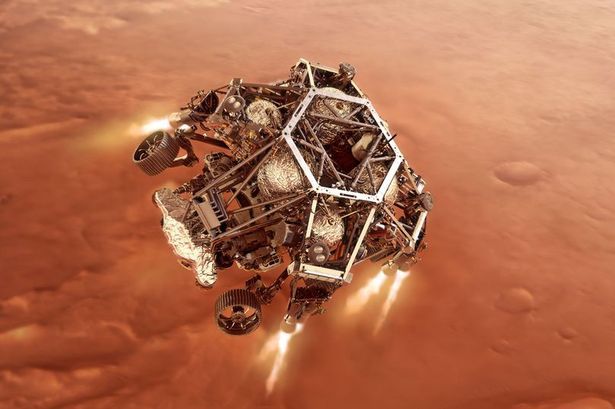 A company from Devon is playing a key role in the search for life on Mars, by helping NASA land a robot on the planet’s surface this evening.

Tiverton-based Heathcoat Fabrics has supplied the materials for the parachute which will hopefully allow the Perseverance rover to drop safely onto the red planet’s surface at approximately 8.55pm UK time today (Thursday, February 18).

The UK Government-backed mission, dubbed Mars 2020, set off from Florida in July last year and will hopefully collect samples to be studied. It will set them aside until 2026 when a retrieval rover is launched to collect them.

The rover – a six-wheeled scientific laboratory the size of a car – will hopefully make a smooth landing after a seven-month, 470million km journey. It is due to touch down in the Jezero crater, a 28-mile-wide depression containing sediments of an ancient river delta.

It is thought that the area could provide evidence of life on the planet, if any has ever existed there.

Rocks and gravel are among the items which will be studied.

One of the challenges faced by those monitoring the operation is the 11.5-minute time lag between the two planets, meaning the rover will have to fly itself rather than rely on human input.

Fabrics supplied by the Devon company have already been used to successfully land the Huygens probe on Titan, Beagle 2 on Mars and to return space capsules to Earth from the International Space Station.

Peter Hill, a director at Heathcoat Fabrics, said the most nervous part of the mission will be waiting to ‘seven long minutes of terror’ as Perseverance makes its final descent into Mars’ atmosphere.

“At that point there’s a total black out and you don’t know what’s going to happen until the rover lands,” he said. “So, as it passes through the atmosphere of Mars and the parachute opens, we don’t really know what’s going on until it’s safely landing and is operating.”

The rover will also carry the Ingenuity Mars Helicopter, which will fly short distances from the rover in the first attempt at powered, controlled flight on another planet.

The space agency’s science mission chief Thomas Zurbuchen said it is ‘one of the hardest things ever done by humanity and certainly in space science’.

Scientists here on Earth will not get their hands on the samples taken by the rover until the early 2030s, should plans made by Nasa and the European Space Agency go smoothly.

Scientists have said that these rocks will be the only way of ascertaining whether life existed on watery Mars three billion to four billion years ago.